From UFC Fighter to Montana Hatter

“Montana is a really special place. It’s almost like a weird magnet that draws creative and inspired people so you, too, are inspired to express your innermost creative self.”

John Cofer did a lot of things before he came to Montana. He’d been known to fashion the odd ceramic pot, is good with woodworking. He was a pretty fair hand as a firefighter and a fine practitioner of the Sweet Science as a UFC fighter!

Originally a Southern boy hailing from Georgia and Tennessee, John first came to Montana to help construct the famous Yellowstone Film Ranch, but just like all of us and probably you too, he fell in love with Montana. And then, unexpectedly, he fell in love with making hats. He was good with his hands, creative, and hard-working. Before long, he’d started Cofer Hat Company.

“I don’t even really like calling it work. I feel really blessed to enjoy what I do.”

Cofer has always loved the history, look, and lore of cowboy hats. He found himself in a small airstream trailer in Montana, sitting at a workbench, staring at the hat block on its surface. Then he taught himself to make hats. First, just for himself and his close friends, but then he started getting compliments on them. Now he’s turned his hobby into a thriving business, though he doesn’t do it alone.

John and his girlfriend, Gina, met about a year ago, “Gina does all the behind-the-scenes work for Cofer Hat Company that goes with running a business and it really would not exist without her,” John says.

“Montana is a really special place. It’s almost like a weird magnet that draws creative and inspired people so you, too, are inspired to express your innermost creative self. Throw in the natural beauty of the mountains, the lakes, the western culture, the outdoor activities…” John says, “It’s just a magical place, which makes it a really hard place to leave once you’ve been.” 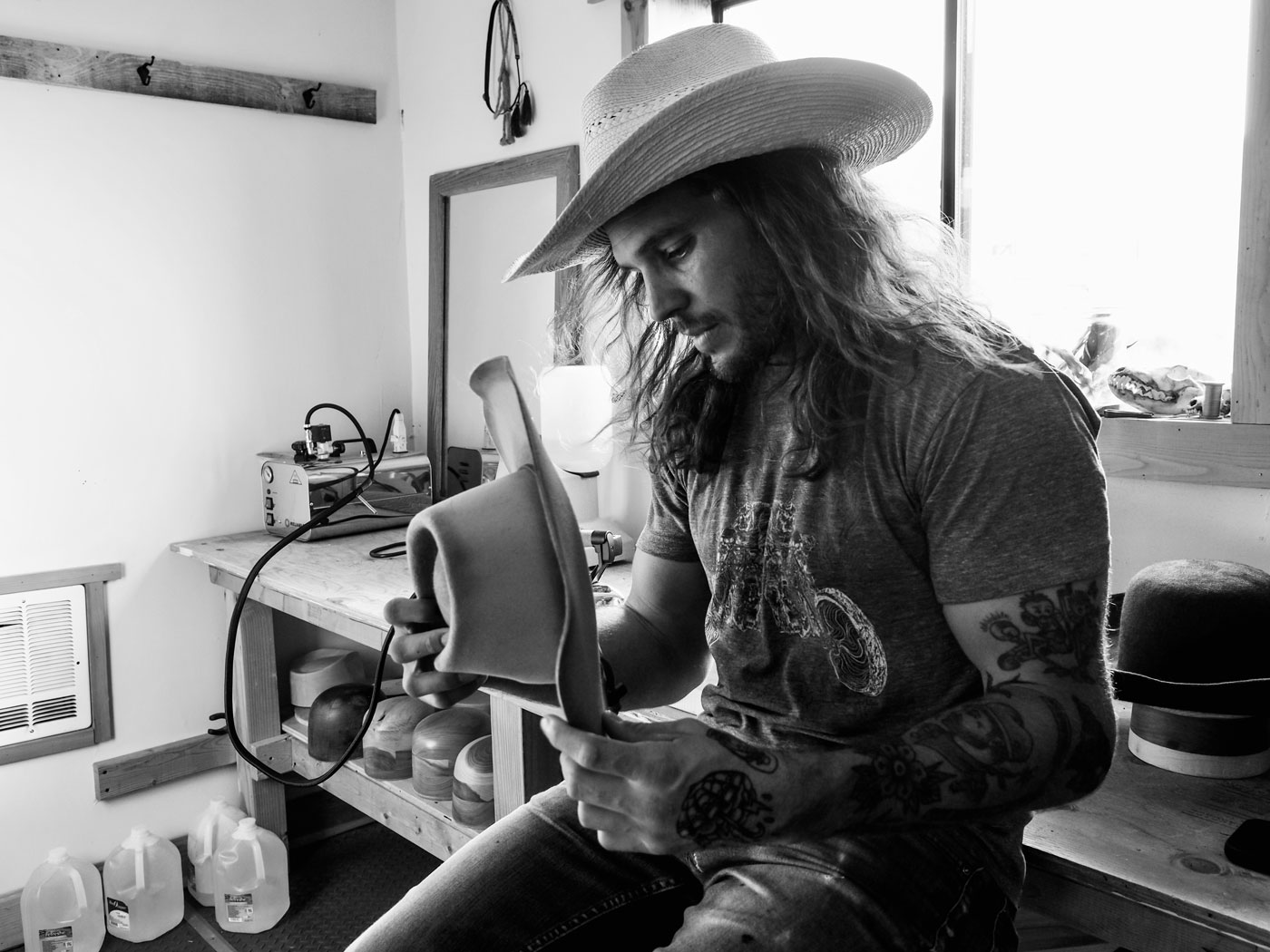 Like so many Montanans, from fifth-generation natives to people who discover they have fallen in love with the spirit of Montana and moved here yesterday, John and Gina had dreams of putting roots down and owning a home here. And though Montanans pride themselves on their rugged individualism, sometimes we need some help to achieve those dreams.

Jackie Wickens and Trecie Wheat Hughes of Yellowstone Brokers are good at that; it’s what they do. They worked with him for a year before finding him the perfect spot.

“Jackie and Trecie sent me a property in Livingston that checked off all my boxes.”

For around 400K, John and Gina have 10 acres in the Wineglass area of Livingston to call their own. Their house is just 800 square feet. For John, this was one of his boxes to check: “I’ve always preferred small spaces. Prior to moving into this home, I was living full time in a 26’ Airstream trailer so actually, this house feels pretty big. Sometimes I wonder what to do with all this space.”

The inside of their house is modest but beautiful—rustic chic, with antlers, antiques and, as John describes it, laughing, “more feathers than we know what to do with.” He adds, “If you ever see Gina, make sure to ask about her collage wall! She’s really proud of it!”

John also utters the one thing that you shouldn’t say as a freshly minted Montanan when he tells me he almost looks forward to being snowed-in during the Paradise Valley›s notorious winters. The roads overlooking Livingston can make getting to town difficult. 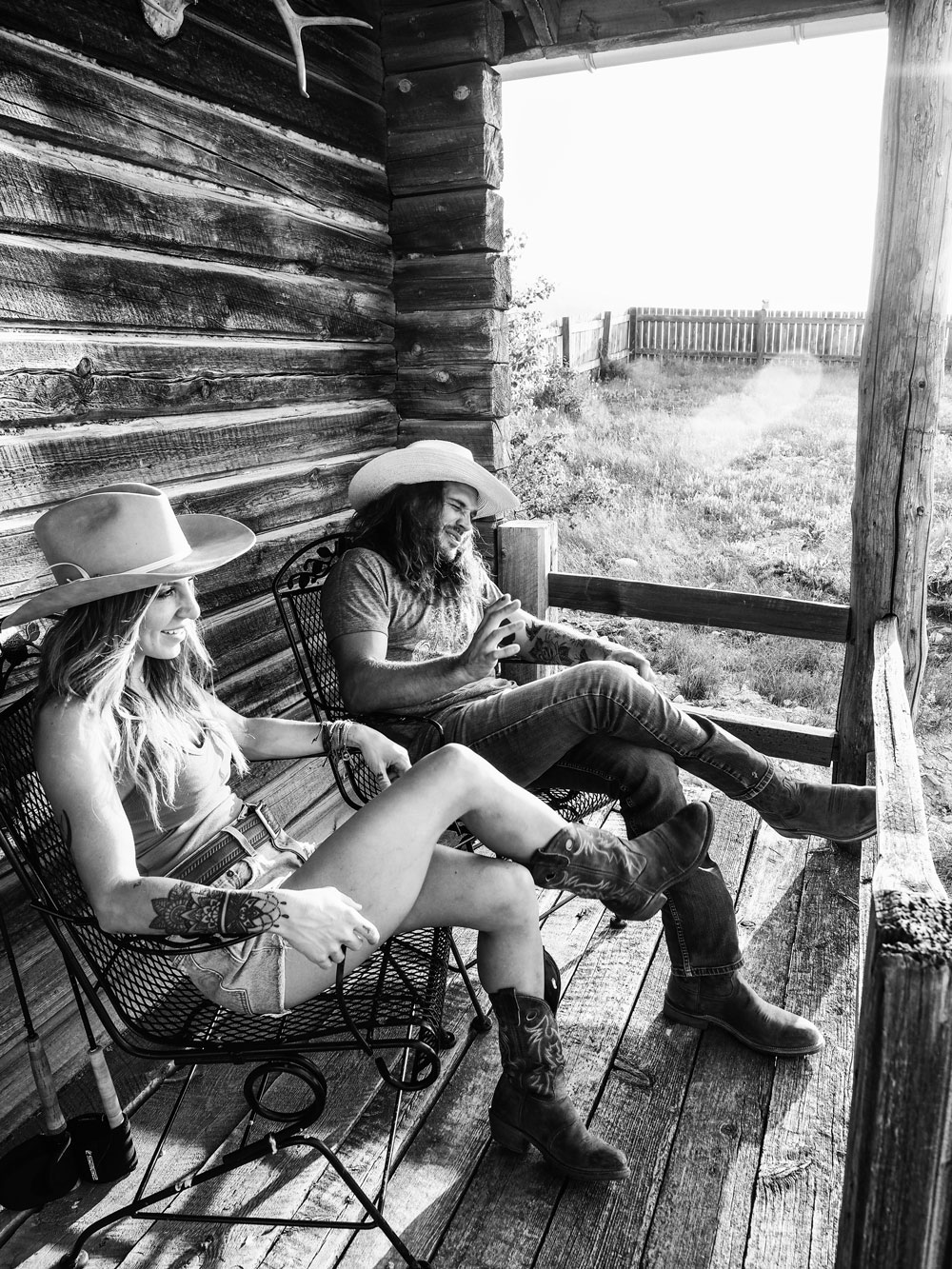 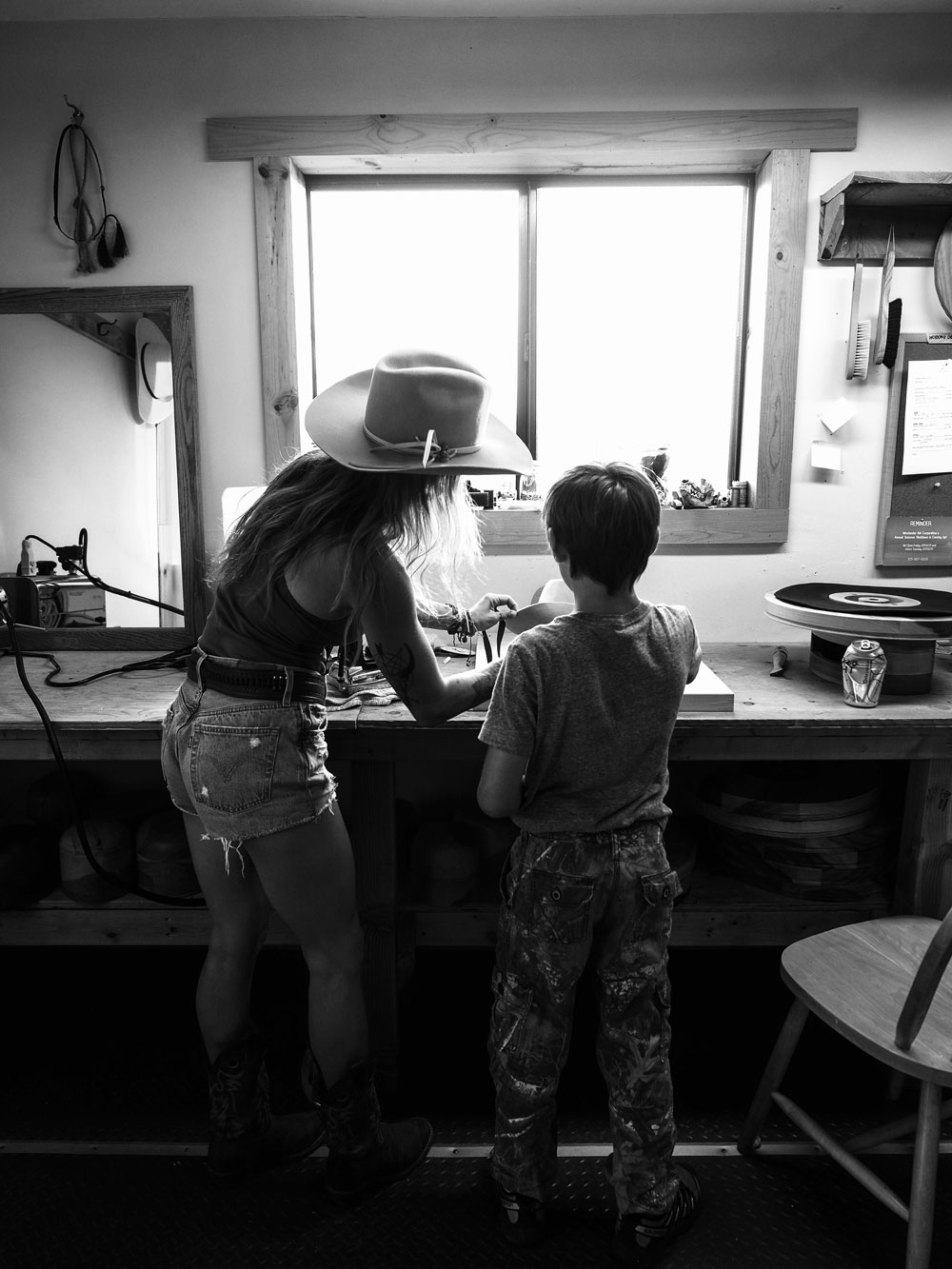 “I’m sure, to many, that might be a drawback, but to us, we embrace it. We’ll light a fire, spend time in the shop, watch the wildlife, drink coffee, play in the snow, who knows. I see it as a forced shut down from the world and reality.” In short, it’s a perfect work and living space for a young couple in love, who aren’t afraid of having to share close quarters.

Ordinarily, we Montanans are skeptical when out of staters make claims like that, although we might allow that if anyone can handle Montana’s capricious winters, it’d be a fireman/UFC fighter.

Still, he adds that a snowmobile is a future purchase in the event of an emergency or a much needed run down the mountain to belly up to a favorite local bar.”

Another benefit of the property is the century-old Yellowstone log cabin, moved onto the property around the year 2000.

After buying the acreage, he says, “I went right to work restoring the old cabin, which included adding plumbing, running electricity, and an 8’ x 20’ addition which is now the bathroom.” Now they rent it out as an Airbnb, entertaining visitors from all over the country. 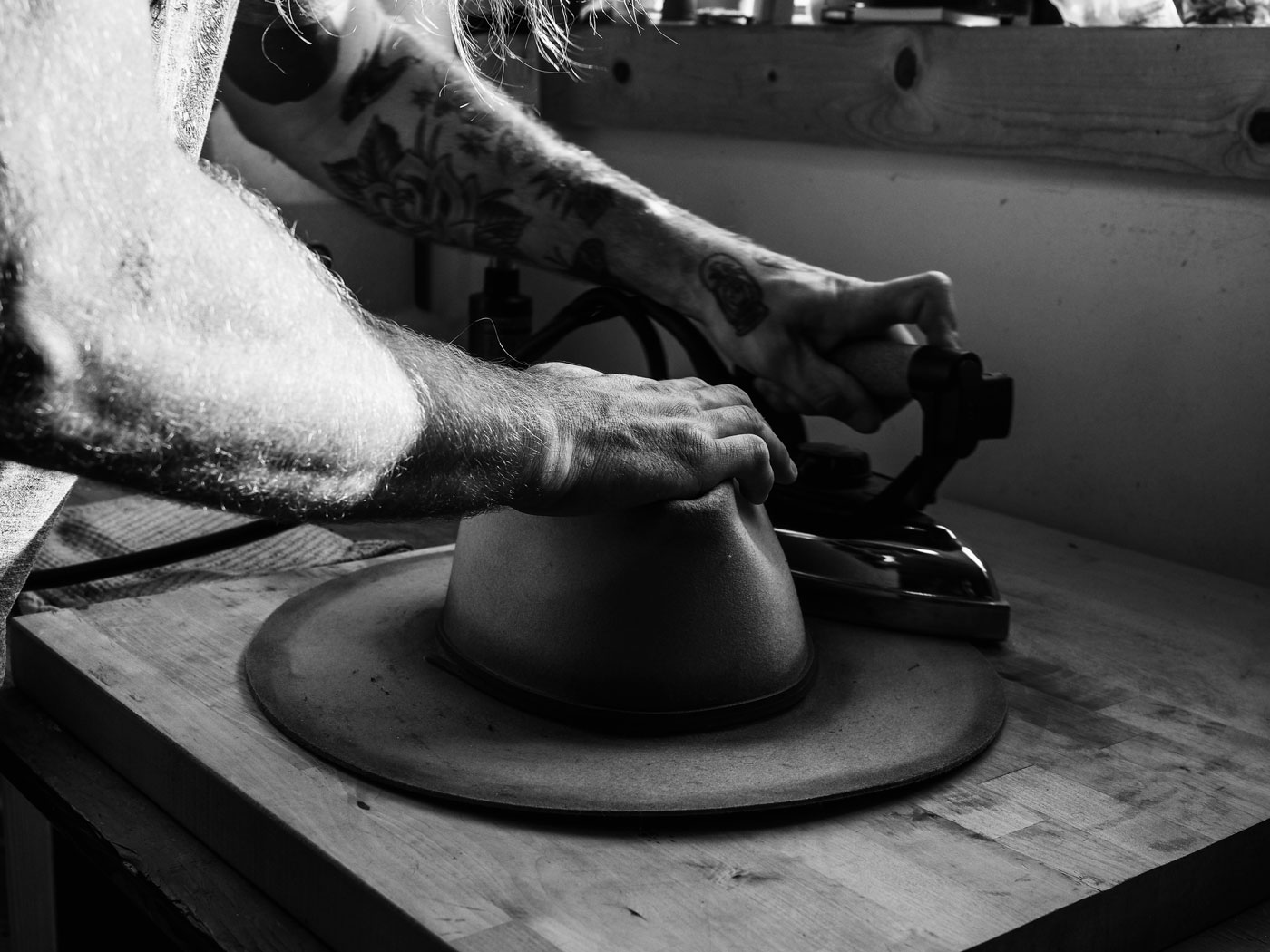 “If anyone is in search of a new property, you’d be doing yourself a great disservice if you didn’t choose to work with Yellowstone Brokers.”

“We’ve had great feedback on the cabin. People seem to enjoy it so far. It’s been a really cool experience meeting people from all over, and they seem to appreciate the design and simplicity,” he says. Plus, the additional revenue doesn’t hurt.

For that matter, the property itself is an investment piece, one which is almost guaranteed to build equity for John and Gina. John says, “It’s really cool to be able to call this property and house mine, a dream come true.” And it’s also nice to know that the beautiful, wild property will only appreciate in value as he lives there—not that he intends to sell it any time soon.

We all have dreams, so I asked John what advice he might have for those of us who want to replicate his success.

His advice is pretty simple: “If anyone is in search of a new property, you’d be doing yourself a great disservice if you didn’t choose to work with Yellowstone Brokers. Jackie and Trecie have been incredible to work with. They stuck with me for many months on the seemingly endless hunt to find a property that worked for me. They’ve been so helpful throughout the whole process and were really fun to work with.”

Would he recommend them?

“Jackie and Trecie have been incredible to work with. They’ve been so helpful throughout the whole process and were really fun.”

Check out John’s hats at: coferhatcompany.com